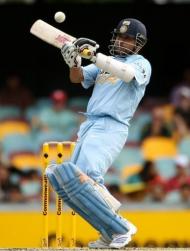 India (258-9) beat Australia (249) by 9 runs in the thrilling second Commonwealth Bank series in Brisbane on Tuesday.

Sachin Tendulkar made 91 in India’s 258 for nine after winning the toss and batting, following his match-winning 117 not out in the first game at Sydney.