Ubuntu is a Linux-based computer operating system based on Debian GNU/Linux for laptops, desktops and servers. Ubuntu is a freeware with web browser, presentation, document and spreadsheet software, instant messaging and other softwares. Ubuntu is just as good as Windows OS.

Ubuntu has Desktop Edition and Server Edition. Ubuntu has been selected by readers of desktoplinux.com as the most popular Linux distribution for the desktop.

Ubuntu gives free security updates for at least 18 months on the desktop and server. With the Long Term Support (LTS) version you get three years support on the desktop, and five years on the server. Ubuntu creates revenue by selling technical support.

Using Ubuntu Desktop Edition Version you can surf the web, read email, create documents and spreadsheets, and more. You don’t to install anything, Once Ubuntu is installed, all the basics are in place. 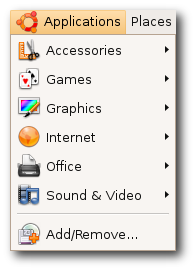 If you need more software, you can choose from thousands of software packages in the Ubuntu catalogue

How can you get Ubuntu?

Check out the download page to get Get Ubuntu for your desktop or server and choose the delivery option that works best for you.