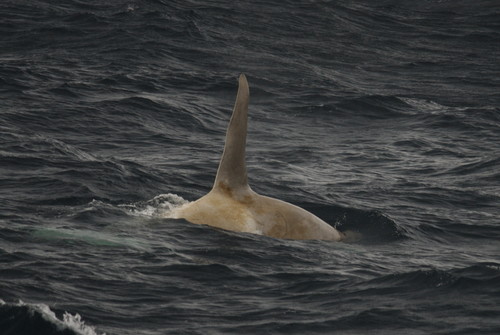 Amazing! .. A rare white killer whale (with a touch of yellow) was spotted while scientists aboard the Oscar Dyson, a National Oceanic and Atmospheric Administration(NOAA) research ship, were conducting an acoustic survey of pollock near sea lion haulout sites.

The white killer whale was spotted with its pod about 2 miles off Kanaga Volcano, part of Alaska’s Aleutian Islands, on February 23. 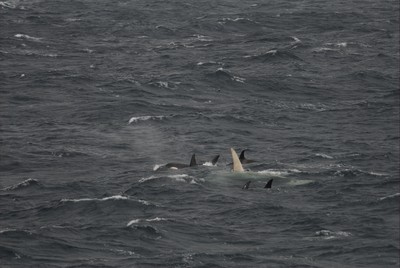 The whale appeared to be a healthy, adult male about 25 to 30 feet long and weighing more than 10,000 pounds.

White killer whales have been sighted previously in the Aleutian Islands as well as in the Bering Sea and off the Russian coast. Scientists are working to confirm whether or not the whale sighted Feb. 23 is the same animal as any of those previous seen.

“I had heard about this whale, but we had never been able to find it,” said Holly Fearnbach, a research biologist with the National Marine Mammal Laboratory in Seattle who photographed the rarity.