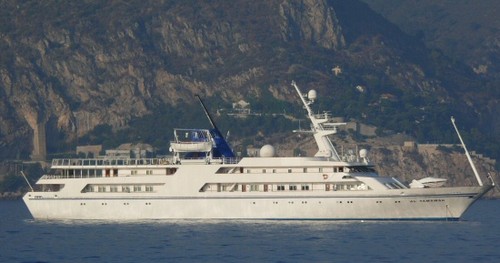 A pleasure yacht with swimming pools,salons and,should the winds of war blow, a rocket launcher and mini-submarine.

The sale of the 269-foot Ocean Breeze, built for and docked on the French Riviera, could be thwarted, however, if Iraq can prove it belongs to someone in the late dictator’s entourage _ and now, therefore, to the government in Baghdad.

The government in Baghdad suspects the yacht, which French authorities seized on Jan. 31, is still Iraqi. But the posh yacht brokerage firm Nigel Burgess says other owners, whom it will not name, have asked it to sell the vessel. The price has reportedly been set at $35 million.

Viewing is strictly forbidden, but several photos of the interior on the Internet site of Nigel Burgess show an opulent Middle East-style decor in blue and gold hues that match the azure sea at sunset.The vessel was originally called “Qadisiyah Saddam.”

The Vessel showed up in Nice with a new name, “Ocean Breeze,” embossed on its streamlined white hulk.The vessel now bobs majestically in the port of Nice, an “extremely luxurious” gem.

Superyachts, as monster luxury yachts are called, are the “ultimate status symbol for billionaires,” said Phil Draper, editor of the British quarterly Superyacht Business. There are only about 30 in the world of this size or larger, he said.