Olympic torch put out in Paris 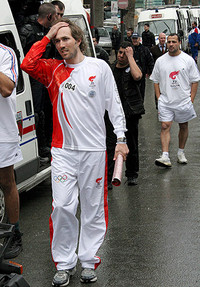 It turned to be a rough day for the Olympic torch in Paris on Monday. Hundreds of demonstrators who gathered at the Eiffel Tower, PARIS, France who were able to put the torch out as it made its way through the French captal.

“We are doing our best but it will take the world to put pressure on China to help bring democracy and human rights to Tibet,” said Phurbu Dolker, a 21-year-old Tibetan refugee.