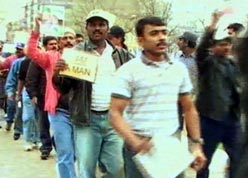 After a staged a powerful protest in Mississippi shipyard in March, now Indian workers alleging they were lured to come to the United States by false promises of permanent jobs, have protested before the gates of White House.

The Indian workers marched 1500 kilometres to seek justice, they marched to the White House, raised slogans and tore up photocopies of their H-2B visas in a symbolic rejection of the guest worker programme.

Previously workers have reported their allegations to the U.S. Department of Justice and wants Signal International, a Northrop Grumman subcontractor, who allegedly held them as forced labour, to be prosecuted on human trafficking charges.

The US Department of Justice has opened a human trafficking investigation into the case, and Congressman George Miller has called for a detailed documentation about the case from Secretary of Labour Elaine Chao.

Over the next couple of days, the workers plan to apprise some key lawmakers of their plight.