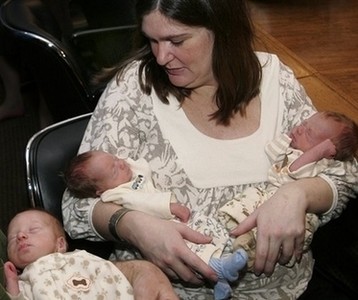 An identical triplets were born to Allison Penn who currently employed as an education specialist at North Shore University Hospital on Long Island, USA — an event so rare it might happen 1 in 200 million births according to an obstetrician estimate.

Tom and Allison Penn wanted a baby more than anything. Now they have three, all alike. The triplets, Logan, Eli and Collin Penn, born last Wednesday.

The babies, developed from a single egg and placenta, were given only a 30% chance of all three surviving by the first obstetrician consulted by the Patchogue, N.Y., couple, said Tom Penn, who called them “miracle babies.”