in Health & Fitness, Most Popular 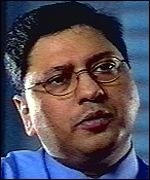 The General Medical Council of Britain has decided to “suspend” High-profile Indian psychiatrist doctor Tonmoy Sharma, 42, from the medical register with immediate effect, after he was found guilty of conducting unethical drug tests on mentally ill patients in the country.

Tonmoy Sharma, a former lecturer at the Institute of Psychiatry, wrongly recruited patients in unsolicited telephone calls without contacting their nurses or carers, the General Medical Council has found.

Dr Sharma, 42, who hails from Assam – India, was a prominent psychiatrist who often appeared on the BBC and wrote books on mental illness. Dr Sharma will get 28 days to lodge an appeal.