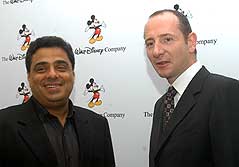 Walt Disney Co. has reached a deal with Indian UTV to double its stake. This is one the Disney’s efforts to expand internationally.

Disney will raise its holding in UTV Software Communications Ltd. to 32.1%, the same level as UTV’s founders, from 14.9%.
By acquiring 9.35 million shares for 8.05 billion rupees.

UTV launched two entertainment television stations last year and another one this month. UTV is launching one movie channel- UTV Movies and a Business channel- UTVi.

Previous post: Bank of America, Chevron made it on Dow Jones