You would heard of malware. But what exactly is Scareware?

Scareware is a type of malware designed to trick users into downloading useless and potentially dangerous software. Scareware is ofter called as Rogue anti-virus.

One of the trick used is to scare a computer user that his or her computer contains errors or is infected with viruses that must be fixed immediately by downloading free diagnostic tools that run a scan. Users downloads some suggested virus remover tool thinking that their system is infected, but at the end user ened with downloading an non-functional or malware software.

Don’t fall victim to scareware. Here is the tips to prevent spyware and malware.

Here is an example of scareware with a pop-up, which look very much like the legitimate ones generated by the familiar Windows icon and the Security Center’s shield icon. But, if you click on the box is in for a scareware. 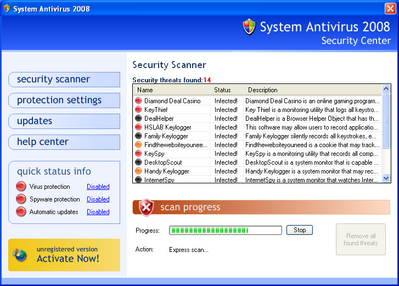