What is Google Cardboard ? 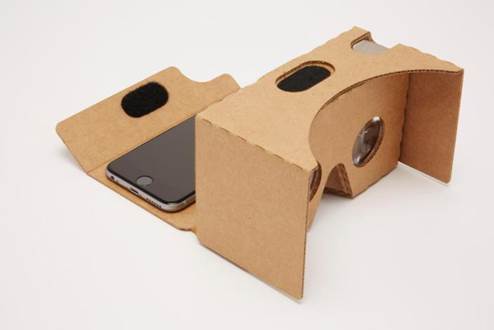 Cardboard is designed with simple, low-cost components like precisely cut cardboard, lenses with 45 mm focal length, a capacitive tape or magnets. It is meant to hold a smartphone which is installed with Cardboard compatible apps. It has a button on right hand top which triggers touch event on the smartphone screen and allows user to interact with the phone.

The second version of Cardboard has easy 3-step assembly as opposed to 7-step assembly of its earlier counterpart and the assembling instructions are available on the Cardboard itself. It supports phones with 6 inch (150 mm) screen size. The magnetic switch in the earlier version is replaced with a conductive lever. The most important feature, it now supports Apple iPhones as well.

The Cardboard compatible app processes images on the phone screen and splits it by applying necessary optical distortions. Lenses then convert these images into stereoscopic 3D images with a wide field of view which gives amazing VR experience.

Google has provided SDK for Cardboard app development. Apps can be developed in Java, C# and Web Standards like OpenGL and WebGL. Third party apps are now available on Google Play and Apple App Store.

Google has announced a new app Expeditions for instructor led shared tours for school students. Expedition ships as a kit with required software for the trip leader, headsets and hardware for both trip leader and students. With this app, trip leader can select a place and students using synchronized Cardboard devices get to experience 3D view of that place. Since this needs minimal setup, it is quite affordable for schools and helps in improving quality of education.