Chit Chat offers a slick Facebook messaging experience within your web-browser. Chit Chat for Facebook (Web) has something useful to offer. 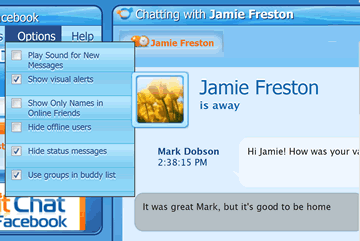 In order to gain access to the Chit Chat’s Facebook web messenger, one must first navigate to web.chitchat.org.uk – the design looks professional, yet engaging and lists a number of reasons why you should use Chit Chat for your online Facebook messaging.

Of the benefits listed, the benefit that initially stood out to me the most was the “use of speech bubbles” – having recently purchased a iPhone 4, upgrading from a phone that wouldn’t look out of place in the stone age, I’ve become a huge fan of speech bubbles in my messaging.

Access to the Chit Chat (Web) Messenger is made possible by clicking the large orange button that reads “Login to Facebook Chat.”

Prior To Use – First Time Use

First time users of Chit Chat (Web) – regardless of whether you’ve used any Chit Chat software applications before, will be asked to login to their Facebook account and will then be asked to grant access to Chit Chat (Web) for use of Facebook chat within their Facebook account. There isn’t anything to worry about here – Facebook forces developers to notify users what information they’re using and how they are using it. Just accept and follow the screens.

You will then be asked to “Click to Continue.” Clicking this link will open the Chit Chat (Web) buddy list and instant messenger window within your current browser session.

Prior To Use – Using Chit Chat Web Again

Having previously used the Chit Chat desktop Facebook chat app, I was surprised just how much I liked their Facebook web messaging interface. The design consists of a buddy list presented on the left hand side and an instant messaging window on the right hand side, the buddy list can easily be hidden by pressing a “<<” button in the middle of the page thus making full screen Facebook IMing possible. The colour scheme is the same as the Chit Chat logo – a variety of blues and oranges.

The buddy list looks fairly generic, your Facebook friends are listed by user groups by default, though, this can be changed by going to “Options.” A mouse over a Facebook friend will highlight them, and a single left click will open up a new “tab” to let you instant message your friends.

Each instant message window that you open will be shown as a tab rather than in a separate browser window, tabs are buttons – tabs are labelled by your Facebook friends name and status, clicking a tab will show the current conversation for that particular friend.

As ones Facebook friends sign in and out of Facebook, the Chit Chat buddy window updates and status notifications are provided at the top of the browser window. I particularly like that the tabs also show the status of a friend, when a friend is typing or when a message has been received but not yet read.

Chit Chat Web has clearly been designed for people who tend to find themselves engaged in conversations with a lot of Facebook friends at once. That’s where Chit Chat excels.

I particularly like the way in which Chit Chat attempts to keep you informed regarding what’s going on with your social network – it’s much easier to see who is online, away or has signed out than on Facebook.com. In addition, showing which friends are typing to you and have sent you messages that you have not yet read.

Chit Chat offers a slick Facebook messaging experience within your web-browser. The use of glossy interface, tabs for conversations with each friend, and speech bubbles helps to give Chit Chat the feel of a robust and very user-friendly web-based instant messaging.

Users that make regular use of Facebook chat will find that Chit Chat (Web) is better than Facebook.com chatting.

Previous post: How do I stop spam mail being sent from yahoo mail ?