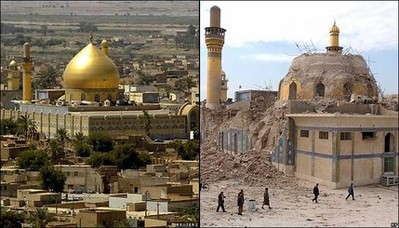 (Image : a mosque before and after)

The death of U.S. troops reaches 4,000 in Iraq after a roadside bombing in Iraq claimed the lives of four soldiers, count of all the U.S. soldiers killed since the start of the Iraq war five years ago.

US Troops deaths are just a fraction compared to the actual civilians killed due to the war.

Iraqi civilians are the main victims of terrorist and sectarian attacks that bring bloodshed to the country, day by day. And, for many Iraqis, news of the latest US casualty toll, means little or nothing at all.

“The death of 4,000 American soldiers does not concern us,” said one Iraqi citizen on a street in Baghdad.