End of an innings for Kiran Bedi, finally 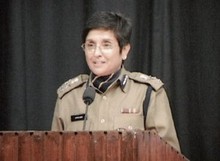 After waiting over it for nearly one and a half months, the government on Wednesday accepted the voluntary retirement plea of India’s first Indian Police Service (IPS) officer Kiran Bedi.

Bedi was clearly irked over being bypassed for the post of Delhi Police chief after Y.S. Dadwal, two years her junior, was preferred this July.

Ms. Bedi, who had been ignored for the hot-shot post of Delhi’s Police Commissioner earlier this year, said: “You cannot be valued in one position and devalued in another. If the Government is really serious about [police] reforms, then why deny me the place from where I can effect them? What’s the point in doing paper reforms when there is no dearth of such recommendations lying un-implemented.”

Saying that she was “grateful to the Government for not having delayed the approval” to her voluntary retirement plea, Ms. Bedi said she would continue to work on police and prison reforms besides pursuing other academic and social interests.

“I am already working on women empowerment in Panchayati Raj and will continue to work to groom future leaders,” she added.

Dr. Kiran Bedi was the first female recruit to join the Indian Police Service, in 1972. Born in Amritsar, Punjab, in 1949, she has a Bachelor of Arts degree in English from the Government College for Women, a Masters degree in Political Science from Punjab University, a Law degree from University of Delhi, and a Doctorate in Social Sciences from the Indian Institute of Science, Delhi. She is also a former all-India and all-Asian tennis champion, having won the Asian Ladies Title at the age of 22.

Bedi is the recipient of numerous awards for her achievements, including,