What is Cell Phone Elbow Syndrome ? 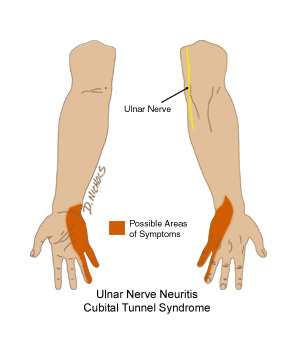 Cause of Cell phone elbow

Cubital tunnel syndrome is caused by compression (like carpal tunnel syndrome) of the ulnar nerve as it traverses the posterior elbow, wrapping around the medial condyle of the humerus. This is the area often called the “funny bone” when it gets hit.

When people hold their elbow flexed for a prolonged period, such as when speaking on the phone or sleeping at night, the ulnar nerve is placed in tension. Leaning on an elbow while driving or working, and sitting at a computer workstation that requires elbow flexion greater than 90 degrees. may cause cubital tunnel syndrome. Making ergonomic adjustments to these activities is beneficial.

When the elbow is bent, the nerve may be stretched and push against the bony bump(above pic).

Most people with Cubital tunnel syndrome problem have a habit of sleeping with either their elbows bent, their arms up by their head, or both.

Affected patients with cubital tunnel syndrome often experience numbness and tingling along the little finger and ulnar half of the ring finger, usually accompanied by weakness of grip. This frequently occurs when the patient rests upon or flexes the elbow.

Treatment can involve conservative splinting and use of anti-inflammatory medications. When those fail, the the nerve may have to be released surgically.

Cleveland Clinic Journal of Medicine, What is cell phone elbow, and what should we tell our patients?. Image courtesy of Ulnar Nerve Neuritis / Cubital Tunnel Syndrome and eatonhand.

Previous post: When Microsoft Windows 7 will be in stores ?