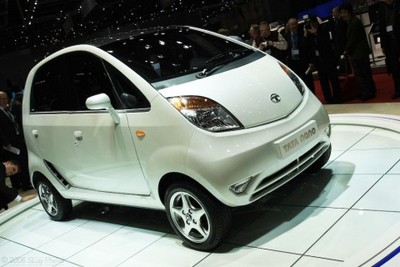 Following its debut in New Delhi in this January, Ratan Tata – chairman of the India’s largest conglomerate Tata Group, unveiled two versions of the world’s cheapest production car – the Tata Nano at the 78th Geneva Motor Show along with three other vehicles, the new generation Indica, the new Safari DICOR 2.2 VTT and the Xenon.

” Nano is not presently planned to be launched in Europe and we are serious about making a contribution to the industry on a global basis,” Ratan Tata told reporters.

Timesofindia reports that when Tata Motors unveiled the Indica 10 years ago, it was a little known third world company, but today all incredulous eyes in the crammed stall were tuned to the world’s cheapest production car – the Tata Nano.