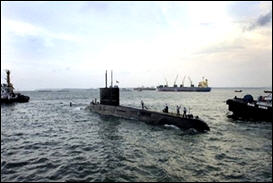 India successfully tesed a submarine-launched missile K-15 (earlier called as Sagarika) which can carry a nuclear warhead from an undersea location off the Orissa coast, a move that boosts the country’s deterrence capabilities.

The K-15 missile is developed by Defence Research and Development Organisation (DRDO). According to Indian navy , nuclear submarine is expected to be be ready for sea trials by 2009.

Powered by a turbojet, the missile can carry a 500-kg payload. It is 8.5 metres long and about a metre in diameter.