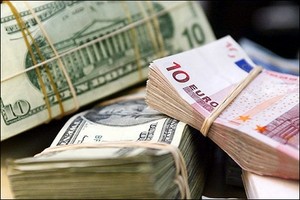 US dollar hit a new record low against the euro after a US unemployment figure report (decline of 63,000 US jobs ) showed the number of people laid off last month at its highest for five years, which increases the chances that US economy may be in recession already.

Dollar touched $1.5459 per euro, the weakest level since the euro was introduced to world financial markets as an accounting currency in 1999.