Google to help green technology in a mass scale 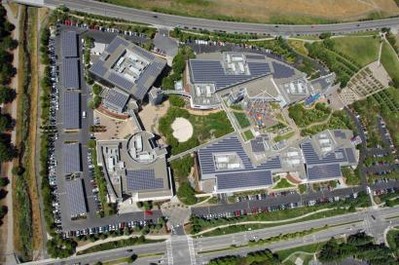 Image: Most of the buildings at Google Inc.’s Mountain View headquarters are covered in solar panels( aerial photograph) :- Photo courtesy of Google

Search giant Google office lights and computers get their power partly from 9,200 solar panels that cover almost every rooftop at Googleplex in Mountain View, CA, the largest solar array ever installed by a U.S. corporation.

Google’s Green goals is beyond it’s Googleplex. The Internet search giant, said it will invest in researching green technologies and renewable-energy companies, to help drive the cost of alternative energy below the cost of coal.

Google and Google.org, are trying to change the way the world gets and uses energy.

• Predict and Prevent — Fund research for emerging threats, such as infectious disease and climate risk