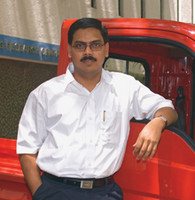 Girish Wagh, the brain behind the Nano says that the length of the car is 8% smaller than the smallest car available in the market.

Tata’s Nano is going to “put India on wheels” what Ford’s Model T did for America nearly a century ago in 1907.

Excerpts from the exclusive interview with Girish Wagh:(moneycontrol)

Q: What is the key under pinnings of the 1-lakh-car project?

A: The cost target was the most important and of course that was the most underpinning. But at the same time, the day we started the development of this product, we were also looking at two other important points, vectors or underpinnings. We were looking at meeting all the existing regulations, be it emission or safety and also package-protect the car for forthcoming regulations.

At the same time, we were also looking at bringing in an acceptable performance in low cost. So, these three things were the underpinnings in the sense we kept on working different concepts for all aggregates, subsystems, components, even the entire product, so that it fits all these three requirements.

Q: You mentioned that it is 8% smaller than the smallest car available in the market, and offers 21% more passenger space compared to the Maruti 800. How did you manage to do that?

A: You are absolutely right, the length of the car is 8% smaller than the car that you mentioned. At the same time, if you look at the footprint, the length multiplied by width is sort of 2.5-3% lower than that car. When we were developing a lot of concepts initially, we worked at various engine-packaging concepts, whether it should be in the front or rear and finally we settled for rear.

Q: What was the advantage of having a rear engine in a car like this?

A: When we have the engine on the rear, we are able to reduce the length of the engine compartment, the first box of the car.

Q: Which means there is more space for the front passenger?

A: Yes. It gives a lot of space for the driver as well as the rear passenger

Next post: Help your preschooler get ready to read

Previous post: A closer look at the Tata Nano