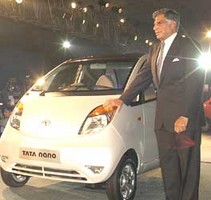 Nano is powered by

The car would be commercially launched in the second half of 2008, and would be produced at the Singur plant in West Bengal.

“This is a proud moment for India. It demonstrates India’s technological and entrepreneurial ability,” Commerce Minister of India Kamal Nath told reporters on Thursday.

“It fulfils the need of the common Indian who aspires to move from a two-wheeler to a four-wheeler,” he added.

Tata, which is in line to buy the Jaguar and Land Rover marques from Ford in the next few weeks, said the Nano will bring the “comfort and safety” of a new car within the reach of thousands of families.